The Golden Rule for Business as Mission 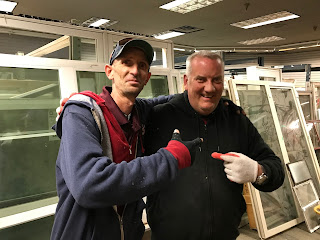 "What’s the nicest thing someone has done for you?"

With that question, we opened a recent Bud’s Warehouse morning staff gathering.

Someone shared about the time he was arrested but the officer arranged to have him released quickly. The policeman waited two hours for him to be processed and then drove him to get help. It was the one caring act that changed the course of his life.

Another staff member told about how a counselor in a drug treatment program went out of her way to help him get into a long-term program. “She single-handedly gave me a shot at having a life again,” he said.

Several others talked about how friends and parents selflessly helped them when they were in need. Everyone quickly realized that sacrifice and selflessness is always behind those nice actions.

But when we changed the question to what was the nicest thing you did for someone else, the room grew quiet, mostly because it’s hard to talk about such things because ex-offenders have been conditioned to believe it shows weakness. But maybe it’s really because we all don’t do sacrificial things for others often enough. Our culture has taught us to look out first for ourselves.

Then we read the Golden Rule.

“Do to others what you would have them do to you.”

Everyone had heard that before but not everyone knew that Jesus taught that in Matthew 7:12. And he taught it in the context of prayer. If you ask for something good for you in the eyes of God, he will give what’s best to you because God can’t help but act like a good father. But like a good father, we need to do the Golden Rule…treat others like we want to be treated.

That lesson is so much bigger than one’s personal life and relationship with friends and family. It is one of the keys to success in a workplace. People who treat co-workers, bosses and customers as they themselves want to be treated are on the way to success on the job and in life.

If you are running a business as mission venture, the Golden Rule needs to be a fundamental value of your organization. Teaching about it opens the door to two topics that in my experience all people like to talk about: Treating others like you want to be treated and creating a space for asking God for help even if one isn’t sure God’s even there.

Indeed, what business wouldn’t be better if it’s employees lived out the Golden Rule and understood that God cared for their needs?
Bud's Warehouse Business as Mission Faith Venture Leadership